The Buzz Behind SharePoint 2016

Here we are once again on the eve of a new SharePoint release (well, sort of) with the community stepping up their efforts to share and re-share what little information has been released about SharePoint 2016, and (mostly) speculate on the future of SharePoint. Don’t get me wrong – I’m excited to see the SharePoint community continue to thrive, but am just a little bit wary of the parade of zealots and haters alike that follow anything new. In case you’re not yet part of the Office 365 Network on Yammer, Microsoft senior technical product manager Bill Baer (@williambaer) announced the availability of the SP2016 IT Preview yesterday that he says are “representative of our 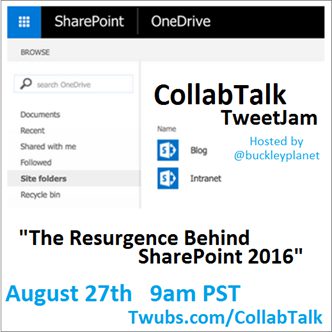 There is already a veritable cornucopia of content available discussing what is included – and not included – within this preview, which will be expanded upon before end of calendar year with a full preview. Articles on CIO.com.au and ZDNet focus largely on hybrid search, with Mary Jo Foley’s latest article pointing to a few more specifics, such as the expansion of the App Launcher, more extensive compliance and security controls, and more tightly integrated Project Server capabilities. I also like Benjamin Niaulin’s (@bniaulin) more granular review. As I discussed with Bill Baer more than a year or so ago, this release is much more foundational than past on prem releases because it’s the first release in an Office 365-world, where innovation in the cloud is driving what will be released on prem. So while hybrid is nothing new, and many of the “new” features seem more incremental and evolutionary than revolutionary, there’s still going to be a lot under the hood when this release goes live in early to mid-2016.

Which is why I wanted to make SharePoint 2016 the focus of this month’s CollabTalk tweetjam, which takes place this Thursday, August 27th at 9am PST, bringing the community together once again to hash it out over Twitter to discuss the topic “The Resurgence Behind SharePoint 2016.” You’ll hear from a panel of experts, as well as interested members of the community, as they share opinions and customer experiences on what they are excited about – or concerned about – surrounding the latest SharePoint release, and how their organizations, partners, and customers are preparing for the latest release. If you’re interested in hearing from a huge panel of experts on this topic, simply follow along on Twitter using the #CollabTalk hashtag, or join the conversation at Twubs.com/CollabTalk

If you’ve never participated in one of these tweetjams, they can be a lot of fun – and for those like me who do a lot of blogging, they are also a great source of material for future posts. Within each hour-long session using the Twitter UI of your choice (Twitter.com, Hootsuite, Tweetdeck, Twubs, whatever) we will go through a series of questions over the course of the hour, responding to Q1, Q2, Q3 and so forth with A1, A2, A3 and always including the #CollabTalk hashtag with your answers. Feel free to reply as often (or as little) as you’d like, ask your own follow up questions, share relevant links, retweet others, and engage with the audience.

The questions we will discuss during the session include:

Participating on this panel are a number of MVPs and experts on SharePoint and Office 365. Of course, this is open to the public, so please join in the discussion!

The panel size may increase over the next couple days, but as always everyone is invited to participate whether or not you’re part of the panel. Join the conversation using the #CollabTalk hashtag and share your thoughts!