Thinking about tomorrow morning’s tweetjam on SharePoint migration preparation (10/30 at 9am Pacific), I started going through some of my answers to the questions we’ll be covering, and kept coming back to one all-important ingredient in a successful migration: end user involvement. Whether moving from an older version of SharePoint to the latest, or moving from an on premises environment 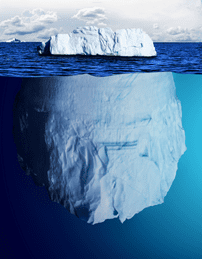 to the cloud, or even moving some data assets from a competing ECM platform, the end users who own and manage the content on a day-to-day basis should have a voice in the process.

I often like to point out that SharePoint migrations are much like an iceberg: what you see on the surface is the technical aspect of the effort — the moving of bits between hardware, but under the surface is where the real work begins – the massive planning effort that really determines how and when your technical migration will take place, and whether the resulting SharePoint environment will, ultimately, be successful. And honestly, do you want to put important decisions about what content to move, how to move it, and where it needs to go in the hands of an admin who does not know the value of that content?

Maybe its just the way I approach problems. As a project manager, your job is to drive the process forward – and make people accountable for the areas that they own. You must decide where and when to involve your end users before you begin, but my advice is to err on the side of giving them control over what they own. People can be the most fluid of your strategic considerations as you balance the risks, requirements, and realities of your migration. Some will fully embrace the assignment to go through, clean up, organize, and prioritize their content – while others will delay, defer, and run away.

How you include your end users really just depends on:

Of course, your end user strategy can also be incorporated into your development methodology, because <soapbox> end users who participate in the creation of a system are more likely to accept and support that system once deployed.</soapbox>

Some suggested strategies for involving your end users might include:

Hopefully you can join us tomorrow morning for the tweetjam, which will include 8 SharePoint MVPs and a host of other experts from around the community – as well as anyone else who would like to join in on the discussion using the #CollabTalk hashtag on Twitter, or by using our tweetjam event site at http://twubs.com/CollabTalk

If you miss the tweetjam, don’t worry – I’ll have a summary blog post available on the Metalogix blog later this week.