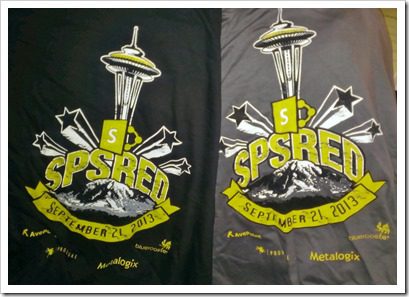 When we began our serious planning for the latest SharePoint Saturday Redmond event, I knew I already had a fairly full plate in front of me with the upcoming release schedule, some planned travel to South Africa, and my regular content output. Then I was invited to present at the Puget Sound SPUG (#PSSPUG) the Thursday beforehand, and I thought “no problem.” I also remembered that there was an IAMCP Seattle chapter meeting on that Thursday, followed by a board meeting. Easy peasy. And then Axceler got acquired…and my plans got a bit complicated. So while I was really looking forward to this event on my home turf, I was also looking forward to having it all behind me so I could get back to normal (whatever that means).

We experimented with a couple new things, and I’m interested in hearing from the organizing committee (myself, Owen Allen (@owenallen), Erica Toelle (@ericatoelle), Sharon Healy (@shealy27), with the help of Trevor Seward (@naupliustrevor) in our soon-to-be-scheduled post-mortem. For one, we held the SharePint directly following the speaker dinner on Friday night. This is something that SPS Twin Cities has always done, with the idea that because its not at the end of a day-long event when people are just flat out tired and want to go home, more people will participate on Friday. And I have to say – the turnout at The Parlor on Friday was fantastic.

We also cut out the keynote speech. The idea was to start things a little bit earlier, and end a little bit earlier. While its nice to have someone senior or, dare I say “famous” come speak to the group, most people are interested in just getting started with the day, and jumping into specific topics. So at 10 minutes before the first session, Owen and I jumped on the loud speaker and welcomed people out, and then things got underway. And I went as fast as humanly possible wit the end-of-day raffle, which I hope people appreciated. I always like doing those… it’s the closest I get to living my dream of doing standup comedy. I always have fun with it.

Another new-ish idea was to have one room dedicated to “Lightning Talks” that were 20 minutes long. When we envisioned this, we were thinking it could be an excellent way for people new to the speaking circuit to dip their toes in the water without having to prepare an entire 75-minute session…..but what we found is that even this short format seemed scary to the newbies. We also had a scheduling snafu where 4 talks were shoved into one block, not giving enough time for transition. But my opinion is that we should try this again next year. Honestly, I’d love to make these more like a TEDx format with a focus on real-world demonstrations. That’d be cool. Has anyone else tried doing this? And been successful?

The one other difference this year was that we actually reduced the amounts we charged our sponsors. I think this is an important topic of discussion. Last year we simply raised too much money – which went into more raffle items, and some went back to the PSSPUG. But the idea is that this should be a break-even event. Our food and materials costs went up slightly, but we stuck to our budget and stood firm on the number of sponsors so that we provided value to all those companies who participated. We could have had 10 more sponsors, but then we would have diluted the experience for everyone. We ended up with 14 sponsors on site, which was a good sponsor-to-people-ratio for our 300 attendees.

For my session, I did a business topic around governance and the cloud, which was originally presented as part of my governance series for the European SharePoint Conference community. My slides are below:

What Governance Looks Like in the Cloud from Christian Buckley

The gist of my message: governance tools and data across different systems (such as SharePoint on premises and Office365, for example) are different, and administrators must understand these differences – and in most cases, manually manage those differences. Because most cloud platforms are still so new, the partner ecosystem has not yet caught up to the rate of change to offer federated views of things like permissions, storage optimization, and other governance controls. As I point out in my presentation, reporting and general visibility across your environment that may be available/possible in SharePoint on prem may not be available (yet) in Office365, so be aware of your compliance, security, and auditing requirements up front, and understand how each cloud component meets those requirements – or where you may have to manually fill in the gaps.

As usual, the last SharePoint Saturday has barely come to a close, and I’m being inundated with questions about my next SPS event. My plan (as of this writing) is to participate in just 3 more before the end of the year. Well, four if you count the Iberian SharePoint Conference, which started out as SPS Barcelona back when Edin Kapic (@ekapic) and I started planning for it, but then it expanded into a full-blown regional conference. That is on October 10th. My next official SPS events will be Kansas City, where Ruven Gotz (@ruveng), Michelle Caldwell (@shellecaldwell) and I will keynote together, followed by a re-launch of SPS Phoenix courtesy of Ken Kuzdas from Neudesic, both in November. And in December I’ll be making my way,
once again, toward the sun at SPS South Florida.

It’s a tough job, but somebody’s gotta do it.