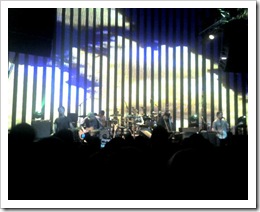 Did I mention that I love working for Microsoft? The Online Services Group had a huge New Year’s bash down at the Experience Music Project in downtown Seattle, with guest band Goo Goo Dolls (yawn). I was planning to go, but was more enthusiastic about the 70’s disco cover band than I was about the headliner…but I was going.

Then, a week before the event, the band backed out. We were all

disappointed, and everyone assumed there’d be some nobody local band put in their place. And then came the announcement that Modest Mouse would fill in. While not a MM “fan,” I have a couple of their albums and so this was a huge step up. Even my wife, who got burned out on concert-going back in 1992, was suddenly excited about attending.

And of course, there is Mr. Johnny Marr, formerly of The Smiths. He was as amazing as always. Still can’t understand that leap. Not to knock MM, but they don’t come close to Smiths. But it was an amazing show. Love the small venue shows. They played in the Sky Chapel, with a giant video wall behind them. Loved it.

Man, I love the perks of working here.