Favorite Lightning Talks (from the past)

I was going through my CollabTalk YouTube page and sorting #M365AMA recordings by workload, and came across some really old recordings from past events, and ended up sharing some links over on my Facebook page. Specifically, I shared links to some of my favorite presentations presented to #SPTechCon audiences over the years. For those unfamiliar with this now-defunct event and the Lightning Talks, these short (5-10 minute) presentations were given to sponsors during the afternoon keynotes. For my first company-sponsored Lightning Talk, I convinced my co-worker to do something funny to garner some attention during an otherwise boring 30-40 minutes of vendor pitches. After one or two more sponsored talks, the organizers of SPTechCon started inviting me to give a Lightning Talk regardless of sponsorship. I continued presenting these for several years.

While they sometimes related to an actual session, most of them had no other point other than to poke fun at my fellow speakers and MVPs. My running gag was that these presentations were part of my “ongoing research” into whatever topic I was speaking on. Digging through the archives, I thought I’d share some community history.

5) SharePoint Surpasses the Success of Cher

Some of you may be familiar with the CherPoint shirts I designed back in 2011. This is the presentation that started it all, presented back in 2011 at SPTechCon Boston, I convinced my peer Gail Shlansky to do something a little ridiculous: compare the career trajectory of Cher to the growth of SharePoint, culminating in release of SharePoint 2010, which, we claimed, surpassed the success of Cher.

I wish I had a video or a copy of this presentation, but some of you may remember it, also presented at a Boston event. I went through a stage where I (and many others) were using Prezi instead of PowerPoint because it allowed you to weave through a large canvas, zooming in and out for a theatrical presentation, albeit causing some motion sickness. During this infamous session, I made several callouts to other MVPs, but the most memorable mentions were making fun of Todd Klindt’s hair, and sharing a series of images of Justin Bieber’s changing hairstyles, with the last image “mistakenly” landing on a picture of Richard Harbridge. All in good fun, of course.

3) The Most Famous Fake SharePoint Band Of All Time

There was also that time when Geoff Varosky and I decided to present on a topic together, and during our initial planning call, agreed to create a fake company around which we would demo several scenarios. Being Goeff and I, we (of course) went overboard with our scenarios, creating the fictional Hoffman Ruler Supply Company of South East North Dakota. As fictional co-workers for this fictional company, we decided that we would also be in a fictional band. After discussing a number of potential band names, in true Microsoft community fashion, we decided to leverage our company’s acronym of HRSSEND and call ourselves Horse’s End. Here is where we first shared this course of events:

Clearly, it was not enough to talk about creating a fictional band. We needed a backstory for the band. We created a fake VH1 Behind the Music video, and even handed out hideous neon green t-shirts in support of a fake tour, culminating in our SPTechCon appearance. Good times.

2) The Most Mind-Blowingly Epic SharePoint Song, Ever!

My second most favorite presentation was at SPTechCon San Francisco where I borrowed a guitar from an employee at the hotel who was gracious enough to run and grab it from his house nearby so that I could incorporate it into my presentation. The guitar was, unfortunately, out of tune. Or was it? You be the judge.

1) Metadata, Taxonomy, and the End of the World

For my favorite Lightning Talk of all time, I do not have a video — but I still have the slides out on SlideShare, thankfully. This gem on taxonomy and the end of the world was fun to deliver, and I’ve done a couple variations on it over the years. 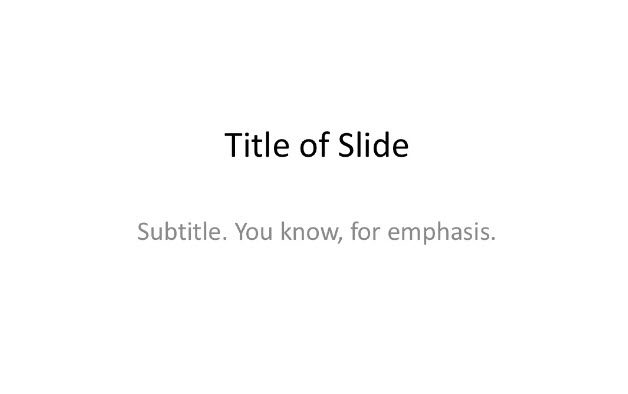