Investing Beyond the Cloud 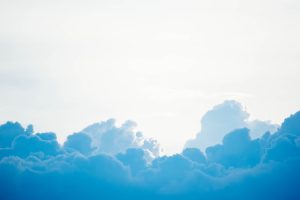 Photo by CHUTTERSNAP on Unsplash

Almost 10 years ago, during a strategic planning session with a former employer, I shared my thoughts on where the industry was headed, and where we should make our next investments. My feedback was that we should position ourselves to “own” the hybrid space, focusing not just on migration (traditionally a one-way movement of data) but on change management (bi-directional asset movement) and, specifically, hybrid management (administration and visibility across on-prem and online assets).

Unfortunately, we did not pursue that path, and in my mind, it was a massive missed opportunity. But then again, there wasn’t a lot of data to back up my position at the time – only my gut feel based on interactions with customers, other vendors, and Microsoft.

And to be honest, that line of thinking was directly against much of the corporate messaging coming out of Redmond at that time, which was still fully entrenched within the on-prem world. It took a couple more years for the various Microsoft product teams to adjust their messaging, finally listening to the feedback not just from partners, but from major and minor customers around the world.

It was also around that same time when I observed my current company, AvePoint, starting to make investments in the cloud. While most of the “old-timers” would be quick to point out that their strategies around the cloud, hybrid, and multi-cloud have changed substantially from those early days, I find the fact that they saw the change on the horizon and ventured out into the unknown to be very inspiring. 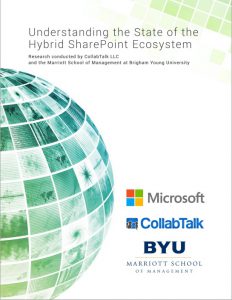 Going through my notes from that era (thank you OneNote), I came across a quote from late 2014 in which Jim Murphy, a Research VP at Gartner, stated that “it will be at least 10 years, if not longer, before enterprises that are using SharePoint are forced to jump to the SharePoint cloud.”

It was an interesting dichotomy: Microsoft was pushing toward the cloud, and yet the largest customers (the companies powering Microsoft’s enterprise success) were more or less laggards to cloud adoption. In fact, in the spring of 2017, CollabTalk worked with the Marriott School of Management at Brigham Young University to conduct research on “Understanding the State of the Hybrid SharePoint Ecosystem” to get a sense of where customers were in their cloud adoption, and how prevalent on-prem SharePoint still was. (If you’re interested, you can still download a copy of this research, sponsored by Microsoft, AvePoint, PixelMill, Redmond Magazine, and others)

At the time, Microsoft was shocked by the number of companies reluctant to move entirely, or even in part, to the cloud, and was standing by their on-prem SharePoint environments. The CollabTalk research explored some of their reasoning, but I like David Roe’s summary:

The one critical factor not on this list would be ‘Lack of visibility across all information assets,’ which is the key to managing hybrid: the ability to see all of my data, wherever it lives, and where possible (where APIs exist, for example) to manage them (migrate, administer, report on, analyze) from one location.

Where are we now?

So what is actually happening within the industry in 2022? Are people still using SharePoint on-premises?

Microsoft messaging is pointing heavily toward hybrid, and as far as I can tell, the move toward the cloud continues to accelerate. While I do find it interesting that there are still net-new installs of SharePoint on-prem, the vast majority or new SharePoint environments are purely cloud. For those organizations still maintaining hybrid assets, most recognize that their goal is to transition, and that on-prem is not a permanent state. On the surface, hybrid seems to answer some of the biggest concerns of moving toward Microsoft’s future vision for enterprise collaboration:

But the reality is that hybrid may not be as easy as a flip of the switch, and may actually increase the overhead of managing solutions that span your two systems.

Over the past year or so, I’ve talked with a couple of the sponsors of that 2017 research about how it would be interesting to conduct a poll and refresh our data — if nothing else, to interview some of the companies who, in late 2016 and early 2017 were reluctant to move to the cloud to find out if/when/how their plans changed, and the drivers behind that change.

I’m no longer conducting these kinds of research projects, but if anyone is planning to pick up where we left off, I’d love to participate.