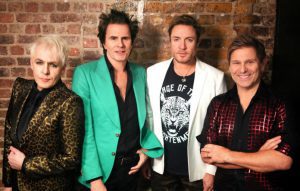 Duran Duran recently celebrated the 40th anniversary of their debut album (Duran Duran), released in June 1981. With more than 100 millions records sold, dozens of top 40 singles, two Grammy’s and a host of other awards, they are one of the most successful bands of all time. That’s all great — but for me, it’s all about the music. Growing up in the San Francisco east bay, I remember hearing them constantly on the radio in 1981-82, and by the time their second album (Rio) was released, I was already a huge fan. While my music tastes have expanded over the years into a number of genres, I still consider myself, at the core, first and foremost a Duran Duran fan.

Later this fall (October 22nd) the band will be releasing their 16th studio album, entitled Future Past. For this #MusicFriday entry, I thought I’d share links to the videos for the 3 singles released so far for the new album, plus 4 songs that I have in heavy rotation that highlight some of the vocals, synths, basslines, and overall melodies that continue to make me a fan of the band. Enjoy.

The first single from their newest album, the video for Invisible was created by an Artificial Intelligence called Huxley, a unique dreamer whose ‘mind’ has been modeled after the cognitive and emotional processes of humans. It is the very first collaboration of its kind, between artists in different planes of existence. In addition, here’s a live performance by the band on Jimmy Fallon’s show.

The second single, More Joy!, features Japanese rock band Chai, who also collaborated on a Pink album. It has a very bubble gum / video game vibe, but with the catchy and definitive Duran Duran hooks.

The third release from the forthcoming album, Anniversary, is somewhat of a celebration of the band’s 40+ year history. While the verse includes a somewhat simplistic bassline, there is a very (intentional) retro synth throughout (with do-do-doot) that is reminiscent of The Reflex and other classic Duran Duran sounds. My least favorite of the 3 new songs, but still enjoyable.

An extra cut from the 2015 Paper Gods sessions, this is my current favorite song in the world. The lyrics are average, the main body of the song is decent, but the hook and melody of the chorus are amazing! This is the penultimate Duran Duran b-side. Love love love this song because of that chorus.

Point of No Return

An album track from 2004’s “reunion” album Astronaut, it has groove, soul, and fantastic vocals. It also reminds me a lot of Come Undone and Love Voodoo from the Wedding Album back in 1993.

Salt In the Rainbow

An unreleased track from the Astronaut sessions, which were rumored to be included on a separate and forthcoming album…which never happened. Of course, as an avid collector, I have two versions of the song on a b-side collection CD named after another cutting-room-floor-gem, Beautiful Colours that you should check out.

And the last song I want to share on this list is a track from the excellent 2010 album All You Need Is Now, with a remix from someone in the community. Duran Duran has a long history of remixes, extended versions, and “night versions,” the latter of which sometime take a darker, moodier path than what appears on the album. I agree with this YouTuber’s assessment that TBYSB is right up there with the best of the band’s earliest albums, and is very much akin to songs like Hold Back the Rain and one of my personal favorites from 1983’s Seven and the Ragged Tiger, the classic Of Crime and Passion.

Hope you enjoy the list. If you’re a fan of Duran Duran, what are your favorite songs?