What You Need to Know About OneDrive Files On-Demand

With so many different collaboration and productivity tools available to users, it’s no surprise that the volume of content created and stored on our local devices (laptops, desktops, storage devices) is growing at an astronomical rate. I remember moving files between systems back in the early 1990’s when it was very painful, requiring a crossover cable and patience. Now with OneDrive Files On-Demand, you have the ability to see your local and cloud file structure, and select which files should be on-premises (local), moved entirely to the cloud, or available in the cloud but accessible on-demand on your local system, whether online or offline, without having a duplicate copy of the file. Being able to view all of your local and cloud files is a huge feature — and with separate icons for local, cloud, and on-demand makes it easy to see what is there and work with the right files. Hope you find this information and supporting material useful. 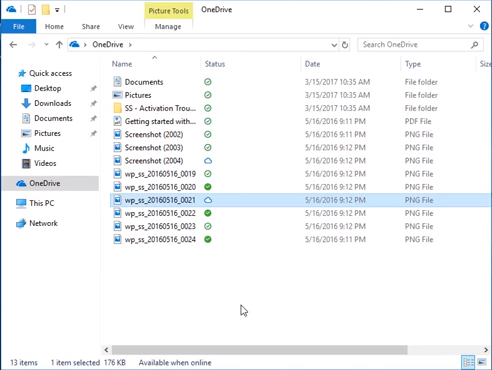 The new feature will now sync all files from your OneDrive, with some files and folders stored on the hard drive. There is also new built-in functionality allowing users to see more than 270 different files types, not only on the web but also the desktop, without having the actual application installed.

Also announced is an improved UI that will allow users to see what has been shared with others through a new information pane, along with an improved UI for sharing options, standardized between Office Online, as well as Windows and macOS, where Office 2016 will be getting the update in the next few months. OneDrive will also allow external sharing with users that do not have a Microsoft account. Other changes include ZIP file support, shared notifications between desktop and mobile, file restore for self-service recovery from mass deletes or ransomware attacks, mobile client updates, and more. [Read More]

With Microsoft winding down development of the Windows 10 Fall Creators Update, it’s time to take a look at the biggest and best new features that this release will include. First up: OneDrive Files on Demand. As you may recall, Files On-Demand is a replacement for the OneDrive placeholders functionality from Windows 8: It allows you to see your entire OneDrive, and access all of the files and folders you store there, directly from File Explorer.

This is a fairly revolutionary feature, though of course Microsoft first implemented it as OneDrive placeholders back in Windows 8. But with this new version, called Files On-Demand, the software giant has fixed all the problems from the past. And it now works better than ever. [Read More]

“This is how I’m using OneDrive Files on Demand”

I’ve been outspoken about wanting the OneDrive placeholders feature from Windows 8.1 to come to Windows 10. In the relatively short time that it was available, it became such a key part of my workflow — especially for collaborating with my frequent co-author Simon — that losing it made me reluctant to move to Windows 10. Now that it’s back, as OneDrive Files on Demand, I’ve flipped my daily driver Surface Book onto Fast Ring. I can finally unmap the network drive that uses WebDAV to fake a view of OneDrive in File Explorer and get back to just having all the many gigabytes of files and photos I keep in OneDrive at my fingertips. [Read More]

“Why don’t I see the Files On-Demand options in OneDrive settings?”

First, make sure you don’t have Windows Information Protection (WIP), previously known as enterprise data protection (EDP) configured on your computer. Files On-Demand is not yet supported when WIP is enabled. If you aren’t seeing the Files On-Demand options, the latest version of OneDrive hasn’t rolled out to you yet. Here’s how to get the latest version of OneDrive. [Read More]

“Office files may not save if Files On-Demand is enabled”

When a large Office file is opened and saved on a PC with the OneDriveFiles On-Demand feature enabled, the save may fail without displaying an error. We are aware of this issue and working on a fix. In the meantime, we recommend taking extra care to ensure that Office files larger than 5 MB are saved successfully in OneDrive. [Read More]

OneDrive Files On-Demand helps you access all your files in OneDrive without having to download all of them and use storage space on your device. [Read More]

“Files on Demand ‘Folder in use’”

I have started using the new OneDrive “Files on Demand” sync engine, great idea, but I have started to experience an issue. Opening Microsoft Office applications is fine but opening PDF’s or saved email messages causes an issue where the file is trying to open but OneDrive is still downloading the file so I get a Windows Explorer issue saying “Folder in use”. [Read More]

“One Drive On Demand”

I just installed Windows 10 Fall Creators Update yesterday to try out the One Drive On Demand. It works well, however I was hoping it would have integration with One Drive for Business. [Read More]