The year began with a blizzard. Thankfully, I found out about it before heading to the airport. I was scheduled to keynote SharePoint Saturday Virginia Beach (#SPSVB), where the event was started a decade ago, but had I boarded my red-eye flight from Salt Lake to Atlanta, I would have been stuck in Atlanta for 14 hours. Not that arriving in Norfolk, VA would have done me any good — the venue was closed down, which cancelled the SPS event. Bummer too, as I was really looking forward to seeing friends and working with a couple clients in the area.

January was largely a blur of content and online activity, as I closed out two large customer contracts and prepared to take on two new customers. Mid-month I was able to venture outside for a couple days to attend the Silicon Slopes Tech Summit in downtown SLC at the convention center. The event had 5,000 attendees in 2017, over 14,000 this year (now the largest tech event in state history), and I wouldn’t be surprised if it surpassed 20k in 2019. Keynotes included Governor Herbert, Mitt Romney, Steve Young, and a parade of executives from some of the leading tech companies in the region. I also got to say hello to former-Microsoft exec and now Qualtrics Chief Experience Office, Julie Larson-Green. Looking forward to getting more involved in the monthly Silicon Slopes events, which are geared toward startups and entrepreneurs in tech. My kind of people.

With the SharePoint Conference North America (#SPC18 and @SPConf) rapidly approaching, as well as a few other major events, I’ve started building out content in support, along with my monthly tweetjams, webinars, and other activities. Here are links to a few of them:

We had some great stats on the January tweetjam, focusing on one of my favorite topics: the Blurring Line between Project Management and Collaboration. The event was once again sponsored by KanBo and tyGraph. Thanks again to both companies!

I’m trying to decrease travel and increase online activities, including webinars. It’s not that i don’t like travel — I just don’t have the time to spend on the road. My company continues to grow, and as a result I’m having to limit my travel so that I can focus on delivery — at least until I can expand my team. I added two new team members in January (welcome Laurel and Connor!), and have reached out to several fellow MVPs to help on other deliverables. This is one time where networking has really paid off. I hosted two webinars in January (one with @duffbert, the other with @mkashman), and participated in a 3rd with @EricOverfield and the team at PixelMill, and the slides and recordings are included below:

I produced a couple more guest posts and online interviews with KanBo CEO Michal Sobotkiewicz (@michalsobot), and am continuing to work with the company on a few video projects — and to point my fellow MVPs toward their free offer to all MVPs (check it out!). But I am particularly proud of the eBook I write for them around modern intranet planning and how to incorporate Microsoft Teams into your strategy:

The research gears have been turning for CollabTalk, with 3 major initiatives concluding in Q1, and 2 new projects started up by the end of this month. I posted to the CollabTalk blog details about open sponsorship opportunities — if there are any topics being covered that are relevant to your company, and you’re interested in learning more about how you can co-sponsor, please contact me. The purpose of these research projects is to provide ISVs and SIs with original data that they can then use as part of their inbound (content) marketing strategies.

And finally, some content that I wrote or recorded on topics that I am passionate about. I have a HUGE backlog of blog posts sitting in draft mode or in OneNote, and am hoping to push more of them live in February:

Lots happening in February, of course. I have several projects running in parallel with Microsoft, am working with Owen Allen on our all-day workshop on Microsoft Teams, which we’ll be running in Branson, MO on March 1st as part of the North American Collaboration Summit (use BUCKLEY to register and get a $50 discount), after which I fly to Seattle to attend the Microsoft MVP Summit. But this month travel is lite, with just one trip — I’m flying down to Los Angeles for a few days with another client that is preparing for a May ICO event.

Some exciting stuff going on in the coming weeks! Keep following the social threads for updates, and I’ll see you in Branson next!

Oh, and one other side note: at the end of January, I launched the Office 365 Influencer Power 100 leaderboard. I’ve been working on it for a few weeks, talking with the Rise team since last summer, and finally got the algorithm baked and pushed the list live. I’ll blog about it again, but please take a look at https://collabtalk.com/o365influencers/ and let me know who you think is missing from the list. I’m being transparent with the algorithm, and do not make any manual “adjustments” to the data coming from Klout and Twitter. But I’m happy to add and remove people, as requested (if you think you qualify as an Office 365 influencer, that is). 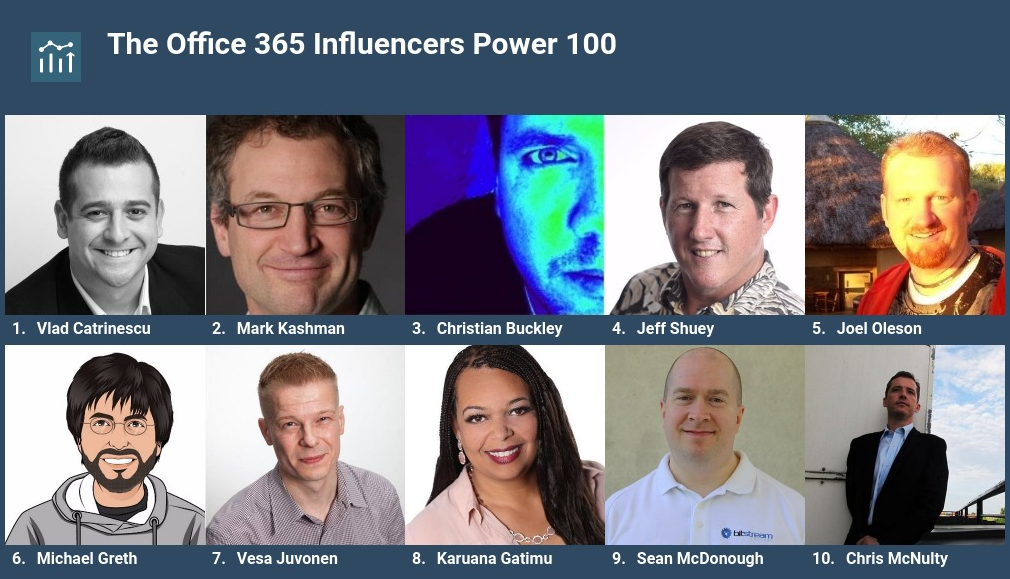