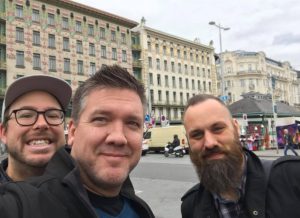 After spending three weeks in October on the road in South Africa as part of the AvePoint #RedBus Tour, followed by two sessions at SharePoint Saturday Twin Cities (#SPSTC) — which made it 4 SPS events in 4 weeks in October — I thought I’d take it easy in November with a quiet 10-day trip to Austria and Ireland for a couple events. All of that, and more, in this month’s content wrap-up.

After a week off the road (I spoil myself), I participated in another Collab365 event where I presented a session on Teams, and then it was back at the airport for a flight from Salt Lake City to Paris, and then over to Vienna, Austria where I was finally able to spend a day walking around the city, thanks to SharePoint Saturday Vienna organizer and fellow-MVP Stefan Bauer (@stfbauer), who gave myself and MVP Sebastien Levert (@sebastienlevert) a tour of the city and a couple museums, including a stop to see some of the work of one of my favorite artists, Klimt. Vienna is a beautiful city, and I hope to get back there soon. The inaugural #SPSVIE event was held at the local Microsoft offices, which had a great layout, and these amazing themed conference rooms. Aside from the morning keynote where I walked through 40 ways to be more productivity with Microsoft 365, I captured a few live streams as I walked around the event and talked with speakers and sponsors. 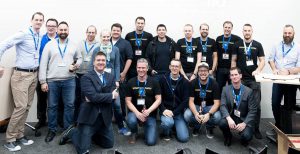 From Austria, a few of us flew direct to Dublin for another fun-filled week at the European SharePoint Conference (#ESPC17), the name of which has been expanded to ‘The European SharePoint, Office 365, and Azure Conference.’ This was my first visit to Ireland, which represents one line within my family name (Buckley is derived from Buck, which is a southern clan in Ireland). Of course, a bigger chunk of my family comes from Edinburgh…which may be an indication of why I love Scotland so much. Hmm… 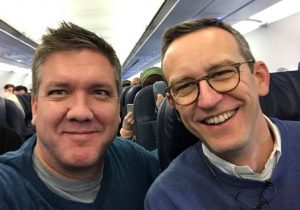 At ESPC17, I moderated a panel on Hybrid SharePoint, and led a session in the final slot of the week on Microsoft Teams, which had a fantastic turnout and some great audience questions. If you were online at all during the week, you probably saw one of the live streams I ran from the event, whether during one of the keynotes, or while hanging out in the expo hall. I’m particularly proud of my friends and customer, KanBo, for taking home the well-deserved award for Best Office 365 Add-In. This was the second time KanBo has been submitted for an ESPC award, and their second win — and I was happy to help them put together their award submission this year. CEO Michal Sobotkiewicz (@michalsobot) was also the most enthusiastic winner to take the stage, which gave everyone a laugh. I also got to spend some quality time with Andy Talbot (@SharePointAndy) and the team from AvePoint (@AvePoint_Inc) interviewing people on the expo hall floor, including a great interview with the gentleman from Dyson, who shared his company’s experience in deploying Microsoft Teams. You should definitely check out the video of that below. 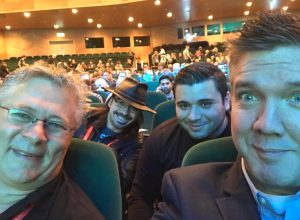 In the midst of all of this November travel, I was also able to participate in 3 different webinars, and run yet another monthly CollabTalk tweetjam. The first was an AvePoint webinar for the public sector market, with myself, Jay Leask from AvePoint, and Microsoft’s Brian Levenson, sharing our thoughts on the blocking factors for cloud adoption within the public sector. For KanBo, I was joined by Michal Sobotkiewicz to talk about SharePoint, Microsoft Teams, and how KanBo can extend both platforms. And finally, Tom Duff joined me online once again for our latest Office 365 Productivity Tips “battle” where we went head-to-head with dueling productivity tips. I have to point out that I won the most rounds, and the overall battle, and am also the current vote leader in the stats that we track around each one of these live and online events. Our goal is to share 10 unique productivity tips during each of these sessions, providing them in a fun and informative format. Watch for another webinar in December, and then again in January — with a live session coming to SharePoint Saturday Utah in February. 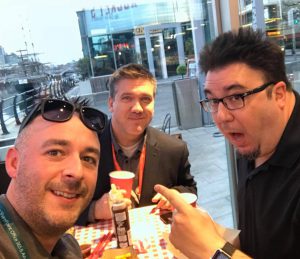 The topic for November’s CollabTalk tweetjam was “Moving Skype to Microsoft Teams,” which posted solid stats, and gave me a number of ideas for new blog posts, which have been added to OneNote for future writing projects. November also saw the launch of three CollabTalk and BYU Marriott School surveys for our current research projects. These are independent research projects being sponsored by Microsoft, AvePoint, SPFest, Collab365, and other partners — and if one of the topics is relevant to your organization, hopefully you can take the time to complete the related anonymous surveys.

Here is an aggregate of the content and videos created during November around a popular topic — Teams:

Two of the Office Productivity Tip slildes with Tom Duff: Here is some of what was captured or created during SPSVIE and ESPC: 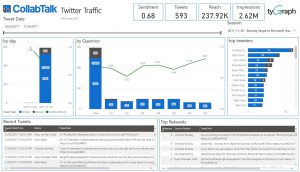 If you follow me on Twitter or Facebook, you’ve probably noticed that I’ve been doing a lot of guest posts for KanBo. They’re a great customer, and I’m a fan of their product — but I also enjoy the video interview series I’ve been hosting with them, and plan to launch a new “show” in January where we’ll add guests to the conversations. That’ll be fun.

Some of the other articles and interview created last month:

Here are the links to the current CollabTalk / BYU Marriott School research project surveys. We welcome your participation!

In December, things get a bit more quiet. I am planning a couple shorts trips to Redmond to visit Microsoft campus, and then to Denver for an MVP event. Other than that, my only travel will be a highly-anticipated vacation to Kauai the week before Christmas with my family. Can’t wait to spend days on our favorite beach, Polihale, body surfing and admiring the start of the Na Pali coast, swimming in Queen’s Bath, and snorkeling at Ke’e Beach. Love that island — our favorite.