The Killer App You Already Use

When it comes to the latest trend in team collaboration – which, as of this moment, seems to be the use of Slack – there are two camps: those who absolutely love it and don’t know how they lived without it, and those who don’t get what the buzz is all about. I find myself in the latter group. Going back to the mid-1990’s, I’ve been an avid user of instant messaging technology, adopting dozens of tools over the years depending on the standards in place (or lack of standards in place) and prevailing cultural winds of my employers. It seems that information workers, in general, are constantly chasing that "killer app" for social computing. But I have to tell you, it doesn’t exist. Not as a single brand, anyway. The killer app is IM itself, and its been around for two decades. 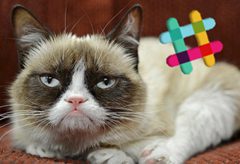 Now, I’m not saying Slack is not a great tool, but the current level of fanaticism surrounding it will soon die down. Why? Because there are dozens upon dozens of “like” products and services out there that provide similar if not exactly the same features. I don’t believe that any single vendor will "own" the space. The Slack fad will fade, and something else that also adds incremental value to the IM category will step in.

Feeling deflated? Don’t be — I really do believe in the value that these tools provide. I have long told stories to audiences of my early project management days at a very large telecommunications provider in California about how we spent loads of budget on expensive conference call lines (this is pre-VoIP technology) that we would leave open for days at a time, with a dedicated phone sitting in the center of a support pod of cubicles during massive project deliveries so that anyone could dial in and find people working and available. Just a couple years later we were using NetMeeting and early IM and VoIP tools to connect people in real-time via chat or voice, from around the world. In fact, when 9-11 happened I was at the end of a working day in Tokyo, watching it unfold on TV, using IM to track down friends on both coasts, and the VoIP capability on my crappy hotel internet connection to call landlines on the West Coast to alert family members to what was happening.

Yes, yes – I realize that Slack is more than just simple chat. But it’s still just chat. And on a daily basis I am using Skype, Facebook Messenger, Yammer, Twitter, LinkedIn, Google Chat, Office 365, and my own company’s tools to pretty much do everything Slack does, from conversations to content sharing to tool notifications (although this last one is where Slack stands out from the crowd – for now). What Slack has going for them now is a superior UX – and that’s a difficult competitive position to defend. Someone will come up with a better UX, and the masses will flock to the “next big thing” and Slack will suddenly feel outdated.

Companies have spent years building and tweaking their intranets, trying to add features and capabilities that end users want – and which will convince those end users to stop chasing every consumer-based application that VCs have bestowed with unicorn status. Platforms like Office 365 can do out of the box what end users want – and when you stand it up and compare the breadth of features and capabilities against a one-trick-pony IM platform, you have to ask “What is the big deal here?”

Again, I am admittedly in the “I don’t get it” camp when it comes to Slack. To me, its yet another way to do things I already do within my much more robust platform….as well as across a dozen other less-robust-but-already-in-place-and-don’t-require-another-login consumer tool.

My advice to the Slack rabid fans out there? Do whatever makes you happy, but please stop calling it the next “big thing,” because it isn’t. Secure, team-based chat has been around for years. Use what works for your team, and leave the rest of us alone.