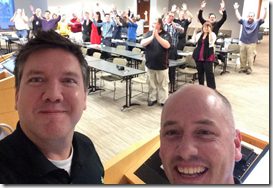 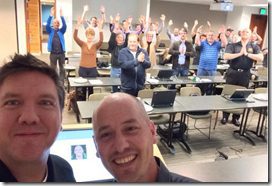 What a month March was. Good golly. Aside from coming down with whatever bronchial goodness has been jumping around just about every workplace (2 rounds of antibiotics seemed to do the trick…except for that nagging cough), pulling together content and demos for 3 Microsoft Virtual Academy sessions (18 modules total), conducting a couple webinars, preparing the household for the return of my oldest son who served a 2-year LDS mission in Arizona, AND onboarding a new employee while running a startup, it was a relatively quiet month. Nothing to see here. Move along.

But seriously, with all that happening, I felt guilty all month for not spending more free time (?) working on content for CMSWire, ITUnity, AIIM, and half a dozen other online destinations. Thankfully, I do this little exercise every month, and remind myself that I did, in fact, get one or two things accomplished. Yea me. Of course, if you want to see all of this action unfold in real-time, you need to follow me on Facebook, which has pretty much become the catch-all for capturing my work-writing-play efforts. Like how the #ShareQuilt was completed (thanks Karen!) and is now on display at the GTconsult office in Bellevue.

But as for this content wrap-up, let's kick things off with what I'm sure everyone has probably already heard about through that non-stop self-promotion vehicle known as Twitter: my Microsoft Virtual Academy sessions. I badgered GTconsult co-founder, COO, and SharePoint deployment wunderkind Craig Tarr (@craig_tarr) into joining me in the studio for two session, 10 modules, to talk migration and management in Office 365. And then earlier this week, I went back into the studio, this time with Office 365 Customer Success Manager (CSM) John Westworth (@palymoth) to talk Yammer administration. Btw, I met John in person for the first time there in the studio (sitting in my preferred chair, no less). With no practice run at all, we just launched right into it, and I think it turned out great. The content from the first two sessions went live first up on Channel 9, and will soon be added to the MVA catalog, and the Yammer sessions went live yesterday — so they'll end up in my April summary. If you're not familiar with it, MVA (www.microsoftvirtualacademy.com) is an excellent (and free) resource for educational material from across the Microsoft stack, and worth a look.

Here are the links to all of that content:

For those who are not yet following #CollabTalk on Twitter, there are two brands to pay attention to: first, CollabTalk on ITUnity, which is the monthly web show that I co-host with Benjamin Niaulin (@bniaulin), Naomi Moneypenny (@nmoneypenny), and Marc Anderson (@sympmarc) where we discuss various topics from around the SharePoint and Office 365 universe. Second, there is the #CollabTalk tweetjam on Twitter, a monthly topic with panel of experts tweeting at a million miles per hour. Here are details on both March events:

One of my newer projects is an ongoing series of interviews with folks from around the community, with a deep dive into topics that they are passionate about. I have been publishing these on SharePoint-Community.net, which primarily serves the European SharePoint community — but really reaches around the world. My plan is to expand on these later this year, possibly turning them into an ebook. Here are the latest installments:

I did manage to write a couple things on one of my favorite topics: social. Of course, it would appear more substantial if my Yammer session for MVA were listed along with these items, since it all happened in March. But my self-imposed rule is to only post links here to content that was actually published in the previous month, and the Yammer sessions did not publish until April 1st. Bummer.

As I mention in the first link below, I had a conversation with Damon Tompkins from MetaVis around some of the problems we both have with the discussions happening around hybrid. The word 'hybrid' has become a catch-all for transition strategies for companies moving toward the cloud, which I feel desensitizes people to some of the difficulties of managing hybrid environments. Would love to hear some feedback from others on these thoughts on the state of the SharePoint community:

One area where I have things lined up, some topics partially completed — but just could not find the time to get things done was around business and leadership. My lone business topic this month was published on LinkedIn. More coming in April, I promise.

Of course, there are a few things which I worked on this past month, but that have not yet been published. I think that's what I like so much about blogging — the instant gratification of creating something, and pushing it live instantly. When you hand things off to a publisher, you never know when its going live. But then you get those pleasant surprises when they finally do go live. Of course, its also fun getting the occasional mention:

The PSSPUG website was redesigned by Craig, and was demoed at the user group this past month, when Craig and I (but mostly Craig) took the stage and presented on cool no-code solutions built in SharePoint Online. You can see the new, simple, and responsive design here (and how we got a standing ovation in the pictures above):

And finally, the entire schedule for Microsoft Ignite went live this past month. And while it was announced in February, here is a link to my speaker page with details on the two sessions I'll participate in at the conference. I am once again grateful to be presenting, and while I'm sure the panel I'm on will get a solid response, I hope to have a good turnout for my individual topic — which is essentially a business topic directed toward IT Pros. My goal is to make it funny and informative. Please come see it if you're attending Ignite, scheduled for Thursday morning.

What else….what else…. Lots of things in the works for April. Finishing my Ignite content, of course. Collaborating with Colligo on something, and with Beezy. Also excited to be organizing a webinar with Melinda Morales from Sony Entertainment later this month, who will also be presenting at the PSSPUG on the 16th, so don't miss that. Oh, and I'm trying to coordinate with MetaVis (now Metalogix) on a joint webinar, as well. And then, of course, April episodes of the CollabTalk show and tweetjam. Gear up, folks: there's going to be some wild weather ahead.