Another SharePoint Saturday Redmond In The History Books 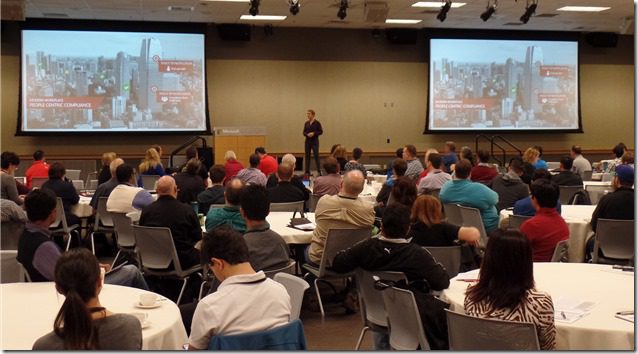 I attended my first SharePoint Saturday in Redmond just after the 2009 SharePoint Conference. I’m not sure why the organizers chose to hold an event less than a month after SPC in Las Vegas, but it happened. And 5 years later, we’re celebrating the successful completion of #SPSRED, which took place in the same location: the Microsoft Conference Center in Building 33 on the main campus. While we didn’t break our attendance record (set by the very first Office365 Saturday event about a year and a half back, also in the Conference Center), we had a very solid 360 attendees, with Microsoft’s Julia White keynoting.

If you’ve ever organized a SPS event (or something similar) then you know that the end of the event comes with mixed emotions,. We spent the last 6 months planning for this past weekend, with regular checkpoints, assignments, finding the funding, rallying the community, and then executing on our plan. Thankfully the Redmond event has a great organizing committee, with most of us having been involved in the last 5 events. My personal thanks go out to Greg Frick, Bo Woronowicz, and Owen Allen from the Puget Sound SharePoint User Group (#PSSPUG), and to Erica Toelle, Chris Beckett, Trevor Seward, and Eric Overfield for helping make this event a reality.

There are always takeaways from these events, things that I would do differently, but for the most part things really did come together quickly and smoothly. Marketing the event can always be improved, for example. We had roughly 60% attendance (360) over registrations (649). How can we improve on that number? With the maturity of these events, we are definitely seeing some SPS fatigue among sponsors at other events, but Redmond has remained fairly strong., Having said that. we had sold out our Gold Sponsorships (K2, Metalogix, and BlueRooster) and 7 of the Silver sponsorships before landing our Platinum sponsor….which I ended up joining a month later (GTconsult). What else can we be doing to support our sponsors? What are other events doing well that we should include in our sponsorship offerings?

One other idea that we have been trying to promote for a couple years now is the idea of “Lightning Talks” where new speakers can sign up for a 20 minute, rapid presentation rather than a 60 to 75-minute session, which can seem fairly daunting. Seasoned presenters can also use it to convey very short and succinct messages. This year we had two – and one of them was mine. People have just not been signing up. Erica and I have been the primary advocates, but we’re thinking about dropping them. Has anyone else done something like this successfully?

We would love your feedback. If you attended, where can we improve? If you were a sponsor, how can we provide more value? If you spoke, what what you change?

Next year is going to be interesting. We’re toying with the idea of doing another O365 Saturday event, still through the SPSevents.org site, but with a broader focus to cover the various platform topics. My sense is that we’ll learn a lot out of the coming unified conference in Chicago next May, and we may change things up based on what we see there. But we will definitely be back.

Looking forward to it.