I have never been a fan of the Jack Welch / General Electric model of employee rankings and ratings as part of the annual review cycle. When done poorly (which is most often the case) the process ca 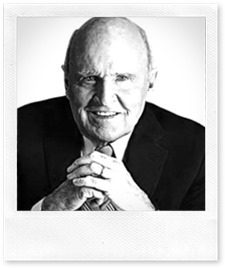 n be demeaning to the employee, an overhead burden on the manager, and an ongoing point of contention between leadership and the masses. Case in point: a manager has 7 direct reports, all high-performers and meeting or exceeding their annual commitments. But during the review cycle, the manager is forced to move one individual into the forced ranking of the bottom 10%, which will likely limit their development and progress in their career at the company, if not drive them out altogether.

Now, on the one side, it allows managers to regularly clean house on employees that  need to go. I get that. The problem is that far too many good employees are affected by this model. And the model does very little to identify crappy managers who use the system to pick favorites, promote friends, and thereby institute mediocrity. Weak managers who go into management deliberations to negotiate and position their employees against peer teams in the larger pool usually fail to properly defend the work of their team, nor fight for fair compensation. It’s no wonder that Jack Welch later rejected the practice of forced rankings, acknowledging that it is only effective in temporary situations when an organization or company requires rebuilding. It was never meant to be the standard, ongoing model.

Now, I no longer work for a company following this model, thank goodness, but some recent conversations brought back some thinking around the topic, and how best to identify — and root out — mediocrity in an organization.

My own management style has long followed the ideas within Marcus Buckingham’s book First, Break All the Rules — a must-read for any manager. Buckingham promotes three concepts (among others): hire the best people possible, figure out what they are good at, and optimize the overall team output by putting those individual strengths to good use. Many times in my career as a consultant and as a people manager I found myself in a team that, on the surface, had several people who were viewed by peer managers as "not well-rounded." My response? I don’t care if a person is not able to present well in front of a crowd if their core function is business analysis and complex problem solving. Where I believe I was the most effective as a team lead was when I was able to put people into roles where they showed the most passion, the most talent, and where I was able to structure my team around those strengths to fill in the gaps so that the overall team was effective. For example, pair a brilliant analyst with an organized and well-spoken project manager who may not have the technical skills to stand alone — but together, they exceed expectations.

The key to successful project management, to a team leadership role, and to a successful employee review cycle is to have a constant dialog with your direct reports about what is happening within the company, how the employee is measuring up to their commitments against their strengths, and to provide active feedback in the moment — as things are happening, positive or negative. I remember numerous occasions of pulling someone aside in the hall or into my office to discuss a mistake made or a customer concern, letting the person know the reality of the situation right there, in the moment — and, more importantly, helping them devise a plan for moving past the issue, repairing a relationship, and learning from it. Similarly, I would let them know when there was positive feedback from the executive team or a customer, highlighting the things that went right. But the point was that I did not wait until the annual review to have that conversation, to let the employee know where they stood. And the process of assessing skills and making adjustments is constant, recognizing that the requirements of the business, the needs of your team, and the skills of your direct reports are constantly evolving.

One problem of the forced ranking system is that it often catches an individual quite by surprise. Monthly or weekly status reports may receive little or no feedback, so when suddenly an employee — who thought they were at least meeting expectations — is told that they are failing, they almost always feel blindsided. In my experience, the factors that most impacted that employee tended to fall into the "not well-rounded" category rather than look to their strengths and actual, day-to-day performance.

But the idea that got me writing was really about the problem of defending mediocrity. The forced ranking problem adds to it, perpetuates it, primarily because the best folks — the risk takers, the creative types who are going to help your product or your service leapfrog the competition — will not tolerate it for long. Nobody wants to work within that environment, except those who are content with working a 9 to 5, not making any waves, pushing through until retirement.

There are always exceptions, for sure, so don’t bother sending me hate mail about how wonderful your job is. I am writing from my own experiences, having worked for several very large companies with different flavors of this practice. Ok, climbing down off of the soapbox now…