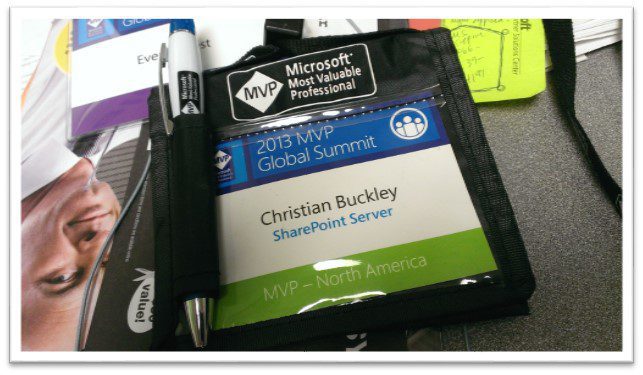 It feels strange to be back in the office. My last couple visits home were a whirlwind of activity, with just a day or two working from the home office before jetting back off to some distant location. I told myself last year that I was going to cut back on the amount of travel, and it just didn’t work out. But this time I mean it – less travel this year, far fewer SharePoint Saturday events, and more of a focus on content. I gave up far too many weekends last year, and I don’ plan on repeating that strategy this year. So its good to be back in the office, sorting through mail and SPUG materials before a week of MVP Summit activities, which kicks off in just over an hour.

For those not in the know, the MVP Summit is a gathering of Microsoft MVPs from all over the world for a week of learning, feedback, and product team interaction, with a good measure of food and fun thrown into the mix. I’ve been watching tweets and posts fly past this weekend, with festivities in full swing….but because I live here in the Seattle area, there was no need to travel early. I am looking forward to seeing some old friends and finally putting a face to a few Twitter profiles, but also hope to get some actual work done in between sessions.

At last year’s MVP Summit (my first) it was the launch of the 2013 platform, with MVPs receiving early access to the latest SharePoint version. All I kept hearing from other attendees was how it was the best summit they had ever attended. And so now here we are, a year later with nothing “new” to be released, but a lot of questions about where Microsoft is taking the platform. Instead of new content, the week is more about roundtable interactions with the product teams, with discussions around the topics of the app model (the dominant topic), social experiences (a couple sessions), and the hybrid model (one breakout that I can see). I know quite a few folks have taken a pass on this year’s summit due to the lack of new content, but I am very interested in hearing feedback from fellow MVPs on what was released last year against a backdrop of real world customer experiences. There were a few heated exchanges last year, and now that people have had time to play with the technology – and hear Microsoft’s positioning of the cloud/hybrid story – I’m thinking there may be some sparks this week. Should be fun!

I’m going to head over to Building 33 for the morning kickoff. More to come…