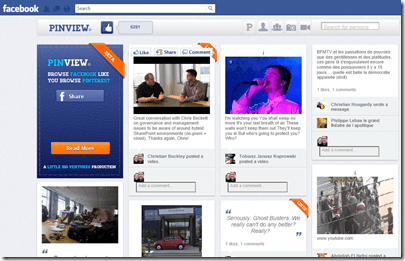 What is it about Pinterest that has more people using it than Twitter, Google+ and YouTube combined? Honestly, I didn’t get it at first. I thought it was right up there with Groupon: short on functionality, long on hype. But now I think I have it figured out: It’s information aggregation on steroids.

Going a few years back, I was a daily user of the free NewsGator aggregator, using their tool to build out a site that collected information and stories from various sources that I plugged in via RSS. The themes and stories, of course, were defined by the editors for the sites and news agencies that fed them, which limited how much control I could have over the data I consumed (other than by ignoring the content or removing the feeds). What I mean by that — I could select the sources for my news, but not the stories within the news sources. So much of what was aggregated was irrelevant to me.

What Pinterest has done is to further refine the model, giving you much more granular control over the content you consume. Based on your profile and your social interactions, your content is compiled in a visual manner, allowing you to very quickly scan through the stories and images, and see what others within your network are sharing and discussing. While you still don’t have granular control over your content to, for example, select only that content which includes one of 5 defined keywords or tags, it is still a step up from the old content aggregators. And the fact that you can jump right into the social dialog around any of these topics — whether a clip from a news feed, an uploaded video, or a status update on someone’s Facebook page — further extends the social power of the tool.

The other powerful aspect of this kind of tool is that you just don’t know what you don’t know — meaning, if all you do in look at the same 4 websites for your content, you’ll have a limited view of the world. Expanding your view by keyword or trends or influences of your social network can open up new content and ideas you might have never otherwise encountered.

Of course, going back to an article I wrote this week for AIIM.org, I don’t view this as a "revolutionary" technology, but an "evolutionary" update to the old news aggregators. And honestly, I still can’t see how to fit the tool into my regular regiment of social tools. But Pinterest certainly seems to have a success on their hands. I’d love to know of any novel uses that people in the community have found for it.