What’s a Little Ash, Glass Particles, and Sand Between Friends? 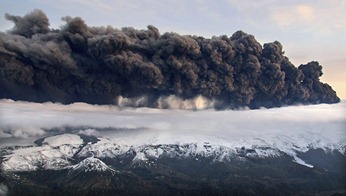 In all the excitement and preparation for SharePoint 2010 Evolution next week, nobody stopped to talk to Mt. Eyjafjallajokull (pronounced ˈɛɪjaˌfjatlaˌjœkʏtl, in case you were wondering). Spokespeople for Eurocontrol, responsible for air traffic control for most of Europe, are not sure when things will calm down enough to allow air traffic to resume to the UK. That’s just dandy. They haven’t seen this much hot gas, ash, and airborne debris pumped into the air like this in a lifetime. All I know is that its keeping me from one of my favorite jogs – around Hyde and Green parks, and of course, Buckingham Palace. I love that area. And of course there’s the fact that we spent money to sponsor an event that we may not even be able to attend. Officially, my response is Argh.