After finishing Outliers, I quickly made my way through Managing the Gray Areas, by Jerry Manas, which was an excellent follow on to Gladwell’s book, because it provided a practical, business perspective to one of my primary take-aways from Outliers — the need to provide more actionable coaching, and stronger feedback to my employees. (How’s that for a run on sentence!) Where Gladwell identifies the need to recognize and utilize talent, Manas illustrates the business value of positive feedback.

Specifically, Manas discusses the behavioral effects of actively observing or providing regular positive feedback to an individual, and how this impacts short-term performance. He mentions the Hawthorne effect – something I remember discussing in B school. It’s also been called the ‘Halo effect.’ 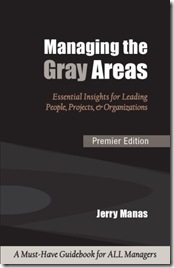 Earlier researchers had concluded the short-term improvement was caused by teamwork when workers saw themselves as part of a study group or team. Others have broadened the definition to mean that people’s behavior and performance change following any new or increased attention. Hence, the term Hawthorne effect no longer has a specific definition.

The Hawthorne studies have had a dramatic effect on management in organizations and how people react to different situations. Although illumination research of workplace lighting formed the basis of the Hawthorne effect, other changes such as maintaining clean work stations, clearing floors of obstacles, and even relocating workstations resulted in increased productivity for short periods of time. Thus the term is used to identify any type of short-lived increase in productivity. In short, people will be more productive when appreciated or when watched.

Manas shared a great example of this halo effect at work: the NBA draft. Studies of NBA drafts show that players picked earlier and paid more are less likely to be traded and have longer careers, regardless of their actual performance — or innate talent. This happens because their value is perceived to be higher than those who come later in the draft. Players with a higher perceived value are paid more, and are traded less.

Within business, we see this same perceived value as part of many formal review models. Where perceived value is higher, rewards are higher. And likewise, when an individual is perceived to be a star performer and treated as such (through feedback, recognition), they often do better overall. Studies have shown that positive affirmation/reinforcement is critical to long-term success, with employees often turning this positive view into innovation.

Of course, this translates across all other relationships. Treat a waiter with respect and kindness, and you’ll more often than not get great service. Treat a bank teller who is obviously having a bad day with patience and kindness, and it will usually brighten that person’s day (if only for a few minutes). And most importantly, show a child love and patience, and they will be more confident, achieve more, and ultimately be more well-adjusted as an adult than a child that is neglected. This isn’t rocket science, but something we could all be reminded of once in a while.