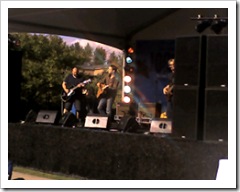 I have been such the slacker these past few weeks. Between end of year reviews, finalization of my team commitments, and a plethora of other time-draining activities, I’ve been neglecting posts on a number of activities. For one, the summer concert series here at Microsoft.

Each summer, the quad over on the Redwest campus is rearranged a bit to make room for a stage, and rain or shine, several major bands are invited to perform on successive Thursday afternoons. This year we heard from Harvey Danger (not my cup

of tea), Toad the Wet Sprocket (pictured above, ala camera phone), and Presidents of the USA. Opening for each band were a spattering of local and Microsoft employee-led bands, a couple of which were really really good. (In fact, the band that opened for Harvey Danger was far better than the headliner)

Just another great perk here at Microsoft, although as a non-alcohol drinker, I was a little disappointed that I had to walk back into a building to grab a soda — only beer and wine was available outside. But there were plenty of jumbo cookies, fruit platters, and jumbo Snickers. So I’m not really complaining.

One thing I thought was funny was that the invitation/announcement for these events was sent out to Redwest residents and their key partners (those of us in Redmond Town Center), and not to the main campus, and when we tried to forward the invite to our friends in other groups, the message was restricted. What’s up with that? Of course, they all showed up anyway…