I had been invited to participate in the episode and volunteered to create a short video on how I connect and use Microsoft Teams Meetings with OBS for my monthly #M365AMA live stream. Unfortunately, my segment was cut for time — but included in the resources segment. Truth be told, I went long. It’s my own fault. But I wanted to explain the how and why of connecting Teams and OBS (Streamlabs OBS, specifically), and when I re-recorded and tried to edit it down, felt it lacked the proper context — and so I decided to go with my long version. Ah well. I still got mentioned at 33:55, so thanks to both Stephen and Laurie!

You can watch the entire episode here:

And here is my (not so) short video in the “Bonus Clips” section: 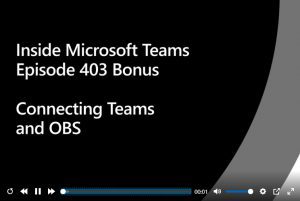