It sounds like people were universally surprised by the news this morning that Microsoft will be acquiring LinkedIn for $26.2 billion (yes, billion with a B) in cash and debt, with both boards unanimously approving the move. The deal should close by end of year. You can read Microsoft’s official announcement here, and a Redmond Channel Partner article here.

Jumping in the way-back machine, I first wrote about LinkedIn back in February 2004, highlighting their then-50,000 paid members and recent funding round with Sequoia Capital. That was when I joined. At the time, I was much more active on the Ryze network than LinkedIn, but IN had a much better UX and was going after the professional crowd, so I latched on. In fact, at the time I was helping run eBIG.org, a non-profit community group with more than a dozen entrepreneur and technology special interest groups (SIGs) around the San Francisco east bay, and we tapped into IN founder Reid Hoffman (as well as Craig Newmark and other Silicon Valley leaders) to speak at a couple of events in those days.

To put it all in perspective, when LinkedIn started up, we lived in a different world:

It’s amazing to think about how much has changed since then. But I know a bunch of you are wondering: Ok, so it’s a professional social networking site. Why would Microsoft buy them?

Well, some stats that might clear things up for you: 433 million users as of end of April 2016, with over 3 billion people having used the service at some point (as of Oct 2013), with over 106 million unique members active at least once in the last month. Some news outlets are talking about a stagnating membership, but the fact is that LinkedIn has continued to grow and bring in revenue. On the flip side, there’s a lot of news focusing on Microsoft’s failed attempt to purchase Yahoo, and the premium price of $60+ per user for LinkedIn’s membership. My response to them? Yawn. 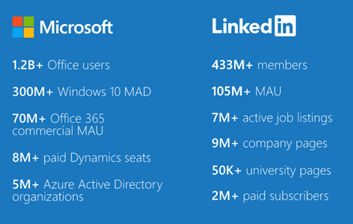 Look, I’m not an investment expert, and whether Microsoft paid too much is beyond my pay grade. I’m more interested in what this enables from a business and technology standpoint, and from that perspective this makes sense for both companies, IMHO.

As highlighted in the Microsoft call with press and analysts, and then shared by my fellow MVP Gokan Ozcifci (@xgokan) via Facebook, the true business value is not simply acquired users, or the management of a social network – but the value added to Microsoft’s Office Graph.

Gokan tweeted out a link to the slides from the Microsoft call, which you can find here.

Think about it: LinkedIn has become “the” professional user profile, and it better captures data and social interactions between the somewhat elusive business decision-maker (BDM) better than any other platform in the world. Now connect those organizational and community insights into Office Graph, Dynamics CRM, and Office 365. Oh yeah, and Bing search results. Plus lest we not forget, LinkedIn also owns SlideShare, which is yet another massive database of user-generated content that now becomes part of the Microsoft Graph (which is a good thing, because Microsoft's Docs.com has not even come close to duplicating its success).

I think it was a brilliant move, personally, and it fits right into where Microsoft is going with building their intelligent newsfeed.

Of course, when I heard the news, I also thought of how my company Beezy could take advantage of all of this great new social data. We’re already building insights and capability on top of the Office Graph, and it will be interesting to see how quickly the LinkedIn data becomes available to partners, because I can see tremendous value very quickly through partner solutions.