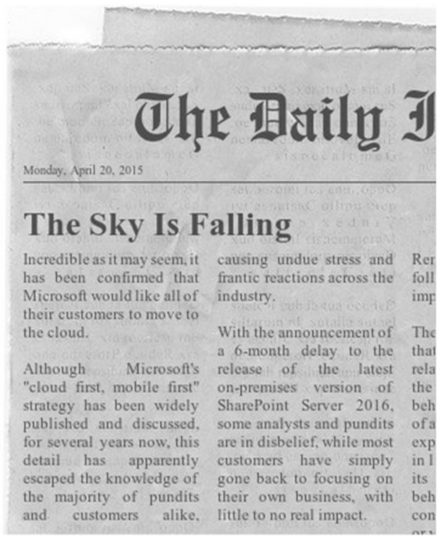 There I was, just coming back from a week of vacation with the family in Hawaii, and people are emailing and instant messaging me, asking my opinion on the news that Microsoft is delaying their release of SharePoint Server 2016. Without knowing the details, I went online to check out the news and blogosphere and experienced the following chain of thoughts as I tried to  wrap my mind around things:

For those of us who have shaped our careers around the SharePoint platform, there have to be some adjustments to what we do and how we do it due to the ever-changing SharePoint platform. What amazes me is the “sky is falling” attitude by so many, which really got its start before SP2013 was even released. While it is generally accepted that Microsoft’s marketing messaging around the cloud has not been entirely successful (I’m trying to be nice), the reality is that momentum is rapidly moving toward the cloud, and the company is responding fairly quickly to where the market is going. One of my biggest complaints about the SharePoint strategy these past few years has not been their vision so much as it has been about their lack of support for on prem environments….which still constitute the vast majority of deployments.

Of course, over the past 18 months or so, Microsoft has recognized this mistake and have made move to fix the product and messaging gap. A couple years back (Feb 2013, to be exact), Gartner shared some statistics around the cloud, saying that within the next 5 to 7 years (2018 to 2020) only 15% of current SharePoint customers would be fully in the cloud, with 35% of SharePoint customers refusing to enter the cloud, and a commanding 50% of customers in hybrid SharePoint environments. At Microsoft’s Worldwide Partner Conference (WPC) in July of that year, Microsoft leadership was embracing those stats, and messaging began to change. A year later at WPC 14, one senior Microsoft executive I met with put those stats at something closer to 20% with no plans to move to the cloud, only 10% in pure cloud, and a growing 70% in hybrid SharePoint environments in the next 5 to 7 years.

What is happening here? I can tell you that in my experience, customers have been pushing back on the (overly) aggressive move to the cloud, and Microsoft has adjusted (is adjusting) to that feedback. It does not change the long-term strategy that envisions everyone moving to the cloud, but it does recognize that moving to the cloud can take longer and cost more than previously reported. More importantly, for customers of SharePoint who bought into its flexibility and power to fit into their unique business requirements, the value of moving was lower than staying put on prem. At least for now.

The near-term reality for many of our customers is hybrid. They want to (need to) continue getting value out of the investments they’ve already made before they begin looking to something new, and as the cloud options mature, they’ll need to continue weighing those options. Increasingly common will be scenarios where key workloads are moved to the cloud. Hosted Exchange is a no-brainer for most customers. We’re talking with one client about using Office 365 for a small subset of their team who want to take advantage of the PowerBI capabilities in the cloud, but have no plans to otherwise move the bulk of their users away from a 2013 environment deployed less than a year ago, and which is meeting their business needs.

Honestly, there is no right or wrong answer to moving to the cloud. At the end of the day, you need to do what makes sense for your business. It’s Microsoft’s job to make a compelling argument for moving to the next version. Don’t move simply because there is something shiny and new – move because it will bring value and new capability to your end users, managers, and customers.