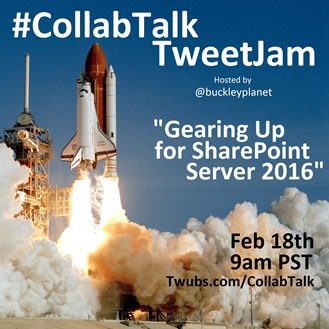 For some reason, the announcement from Microsoft that there would be another on prem release of SharePoint Server caught a few folks by surprise. Honestly, I'm surprised that people are surprised. Microsoft has always said that they will continue offering an on prem release as long as businesses wanted it, and my prediction is that this won't be the last, with another version to be released in another 3 years or so. And I'm sure others have equally strong opinions in the opposite direction — which is the gist of this month's #CollabTalk tweetjam.

On February 18th at 9am PST, our panel of MVPs, MCMs, and community experts will dive into the topic "Gearing Up for SharePoint Server 2016" in a live tweetjam via Twitter and the #CollabTalk hashtag, or through http://twubs.com/collabtalk. Anyone can participate in the discussion — or you can just lurk and watch it all unfold.

Of course, Julia's post caused a lot of discussion in the community, and you'll find a veritable cornucopia of content out there on the topic. For example, Kurt Mackie wrote an article on RedmondMagazine.com talking about the state of forms in SharePoint 2016. Whether InfoPath will still be supported has been a huge point of discussion (thanks to @RuvenG), spurring rumor and speculation on various other topics. Its brought up some great discussions around past versions, and is raising expectations (in my estimation) for the Ignite Conference in May. In particular, I would point you toward Bill Baer's post The SharePoint Journey which outlines the history of SharePoint through each iteration. Bill (@williambaer) is a senior technical product marketing manager on the product team, and one of my former peers back from my Microsoft days.

New to the tweetjam model? It’s a gathering of experts on a very public channel (Twitter) allowing anyone to watch or participate. We provide a site at Twubs.com/CollabTalk to capture the conversation, or you can use Twitter or Hootsuite or any other platform you’d like to follow along or jump in. Over the course of the hour, we’ll walk through 7 main questions and give our panelists and participants a chance to answer, share links and experiences, and to ask their own follow up questions, The only guidance is to remember to include the #CollabTalk hashtag and, where relevant, the question/answer number so that people can follow the conversation.

The questions we'll be asking this month include:

Of course, there will be many side questions and side conversations. That's the point: these questions are meant to start the dialog, and then let the conversation take its many turns. For this month's event, here are some of the experts who will be joining the discussion:

We'll add a few more names over the next few days, and, as always, many more not listed here will join the discussion. We're averaging over 125 active participants per tweetjam, with millions of tweet impressions reaching hundreds of thousands of Twitter accounts. Not too shabby. Looking forward to the discussion!

Oh, and if you're interested in personality-driven discussions of the latest SharePoint and Office 365 news and topics, be sure to register for the next CollabTalk episode on February 24th where we'll be discussing Delve boards, the need for more developers in the SharePoint space, and Skype for Business. Register for the next episode at www.ITUnity.com/go/CollabTalk