In the important American film Back to School, there is one scene where the late Rodney Dangerfield – who in the film plays a wealthy businessman who goes back to college to spend more time with his son, but instead of doing his homework on his own, “outsources” the workload to a team of experts – gets into a verbal altercation with author Kurt Vonnegut and fires him for writing a bad paper. Vonnegut (who appeared briefly in one scene) had been tasked with writing a paper on himself, but the paper earns a failing grade after the teacher figures out that Dangerfield did not do his own homework, with the teacher famously telling Dangerfield “Whoever *did* write this doesn’t know the first thing about Kurt Vonnegut!”

It’s funny that as I sat here thinking about one of the gaping holes in the measurement of social influence, this hilarious scene came to mind (some additional insight into how my mind works).

A lot of people question the validity of social influence scoring. We can’t see into the algorithms, because then we’d be able to manipulate our scores. And they’re all constantly evolving, and, in theory, improving as they capture more and more data, and the statistics learn about our patterns of social behavior over time. But shouldn’t your established ownership or expertise on a topic be a part of your overall score? Using the example above, shouldn’t Kurt Vonnegut have the highest Klout score on the topic of Kurt Vonnegut?

Another example: I currently have a higher Klout score than the SharePoint product team on the topic of SharePoint. Yes, I realize that Twitter and Klout profiles are run by people, not teams, and that their scores are an amalgam of overall social activity – meaning that the score are weighted across multiple social platforms, and different types of interactions — but I do think there should be exceptions where brands or products come into play. Maybe the SharePoint product team is only posting to their blog, tweeting out links, and occasionally re-tweeting other relevant links from the community. This is enough to build a moderate Klout score. But I am also very active on Facebook, Google+, LinkedIn, Instagram, and LastFM, posting content across a dozen sites on a regular basis, and interacting with readers and re-tweeting a dozen or more times a day. That is why my Klout score is larger than the SharePoint product team’s score today. 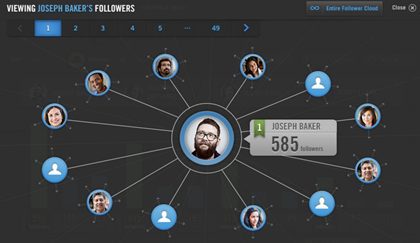 But should that be the case? Should there be a way to see more clearly the social influence of a person or a brand within a specific topic, rather than across this broad blend of topics and activities? I think so.

Part of the problem is not understanding entirely how the algorithms perform. The SharePoint product team may have more K+ points from the community on the topic of SharePoint than I have, but I have more activity online in a variety of topics, giving me a broader depth of networking activity, thus raising my overall score. Maybe the answer is for Klout, Kred (which provides a Pinterest-like view into your influential activities), PeerIndex and other similar efforts to quantify social influence to recognize differences between individuals and brands (they’re starting to do this – but only in how you define your profile, not yet with any differentiation in how their scores are indexed), and between overall influence and the influence within a specific, targeted topic.

So maybe my overall Klout score is 71, but my “Klout Topic Score (KTS)” for SharePoint might be 87, my KTS for Yammer might be 75, and for Lord of the Rings it might be 49 (need to work on that one, get it up higher). By breaking out this level of detail – and in this example, maybe the SharePoint product team has a KTS for SharePoint of 95 – it may do wonders for giving credibility to Klout and other social influence scoring tools, and giving people (and advertisers) a much better view into the true influence of a target subject.

For most people, this level of detail is probably overkill – but within the enterprise, you can begin to understand the importance of granular social influence as you try to identify internal – and external – influencers for your own products, services, or brands, allowing you to do more to support those people and help them continue to advocate on behalf of your brand. It’s an area my own company, Axceler, is getting into, and its becoming increasingly important to the social collaboration space.