Freudian Personality Types and the Many Faces of Influence

While in Columbus, Ohio earlier this year I was hanging out with members of the Buckeye SPUG and folks from one of Axceler's local partners, ICC, and got into a fascinating conversation with Josey Neidhart (@JoseyNeidhart) from ICC on the topic of social influence and, interestingly enough, Freudian personality types. Actually, we started talking about the Insights program I went through with my team while at Microsoft, which lead to a conversation about team dynamics and leadership styles, which then lead to the topic of social influence. I had hoped to write an article or two on some of the topics we discussed, but what prompted me to action this week was seeing an infographic (which I tweeted out a couple times) on the primary personas behind social influence.

I'm sure I've lost a couple folks. Not exactly a straight line between these things, I know, but here is how it all fits together in my mind:

Insights. While working for Microsoft, I would visit with various individuals and from time to time see in their offices on a shelf little colored foam building blocks, like Legos. Each

set of these blocks included one  of each in red, blue, yellow, and green. I was told it had something to do with a team-building exercise, but that was about it. After joining my second organization, all of the people-managers attended an offsite where an organizational development team from a vendor called Insights were on site to guide us through their Insights Discovery process. Based on work by psychologist Carl Jung, the goal of the program was to help people understand their own management or leadership style, and from there to understand how those styles connected with, related to, and managed the other styles.

I won't bore you with details, but it is a very well organized and useful team development exercise — one which I was able to draw upon numerous times to help resolve conflicts within my own team. The colored blocks represented the four primary styles: Red for task-driven, or your classic A-personality type; Blue for data-driven; Green for relationship or nurturing personalities; and Yellow for collaborative, expressive personalities. Each of us has all of these qualities and draw upon them as needed, but we tend to lead with one, and can, with a little training, identify the traits in others fairly easily.

No surprises: I am almost equal Yellow/Red (on a scale of 1 to 100, I was 82/78), followed by Green and a small sliver of Blue. I want to take collaborative action, now! I'll high-five you on the way (no hugs, please) and will send you an email on the data I need you to gather.

Pathwise. In my waning days at Microsoft, I was introduced to a fairly in-depth leadership development program by my friend Heather Hamilton (@Notyoursugar) called Pathwise, which was developed by psychologists Todd Hollow-Bist and Chad Hattrup. Similar to Insights, one of the goals of Pathwise is to help leaders identify and understand their own style and those of the people around them with the idea that understanding these styles will help you better understand people's motivations, and your own reactions/responses to people and circumstances. Much of their program (outlined here) draws upon Freudian concepts such as ego, Id, and oral fixation (joking about that last one), as well as material from Psychological Diagnosis: Understanding Personality Structure in the Clinical Mind, which is pretty much "the" textbook on character pathology, outlining the 9 personality types.

Whether or not you agree with Freud or Jung is not the point. When people are backed into a corner, we regress and respond with certain personality traits. The reality is that we all lead with one of these personality types, just at a higher-functioning level than what is displayed when we are under duress. And if we better understand our own personality a little bit better, and how we may react to certain situations, like stress or organizational conflict then we can prepare ourselves for those situations and, in the end, become better managers and better leaders (see how I separate those two things? That's because they are very different)

Hopefully these two topics — Insights and Pathwise — make sense together. They are similar programs, though Pathwise is much more in depth (and a major time investment), and for those who may be looking for this kind of leadership development program, I highly recommend it if you are based in the Seattle or San Francisco areas.

[Side note: I helped organize the first Pathwise cohort at Microsoft, and worked to help get them approved as a Microsoft training vendor. It has really caught on there, with a dozen or more cohorts and two of my former VPs having completed the program]

Social Influence. If you follow this blog, you know that I've written a few posts about the growing category of social influence. Making the biggest headlines is Klout, but they are really just scratching the surface to the potential of this facet of business intelligence and analytics. The idea behind this relatively new category of analytics is not just about gathering data from social networks, but look at depth of engagement and ability to inspire action. Klout just happens to be an easy model to discuss because most people have had some experience with it. Klout looks at your activities across all of the main social networking platforms, and gives you a score between 1 and 100. It's not about how many people follow you, or the number of tweets you send out — although they both factor in — but in how your network responds. If you send a tweet or post a picture on Facebook which then gets re-tweeted or shared with others, who then share with even more people, THAT is social influence.

Early on, Klout also included in your individual profile a personality category, or classification. You might be a "pundit" or "connector." My problem with including this information was that there was no explanation as to why, so insight into their methodology, or why you might move back and forth between two or three classifications, as I did fairly regularly.

Josey and I discussed the idea of measuring personality types/traits based on social activities and influence, and possibly using offline systems like Insights or even the Freudian personality types to help organizations better define, and predict, behavior within collaboration platforms (like SharePoint). There are possible applications in the areas of user adoption (get more users to log in and use the platform), end user engagement (making collaboration platforms more "sticky" so users stay on them longer, get more involved), and gamification (using games, incentives, and rewards to encourage specific user behaviors).

Great conversation in Columbus, and I hope to continue the dialogue with Josey, from which you should see some more content in the coming months.

Social personas. Of course, what triggered this blog post was an article that showed up today in my newsfeed about the different faces, or personalities, of social influence. The infographic is below, but you can also download a copy of the associated whitepaper here. 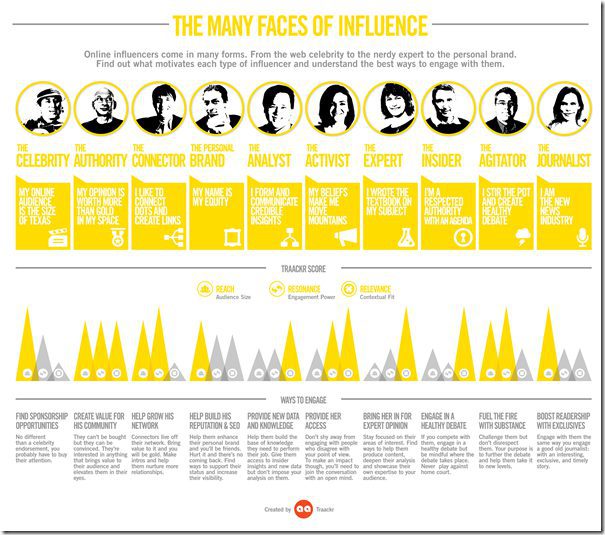 I'm interested in the science behind social informatics, as I view this as an area of burgeoning within the business intelligence space, impacting marketing, sales, operations, software development, and social networking itself. Right now we're in the early stages. The social technology may not be new, but the way in which we're using the data captured by these systems is brand-spanking new. This is the Big Data problem. The volume of data being created, and the speed at which it is being generated, is increasing rapidly. Moore's Law around micro-processor speed and capacity is dwarfed by the gro

wth rate and complexity of the data organizations capture and store. And like every other Big data problem, people just haven't figured out what to do with it yet. I do believe that innovative companies will begin to figure out our social networking activities and patterns, be able to figure out much about who we are and how we collaborate, and utilize this information to sell more products to us, proactively identify and meet our needs, and then lure us down into subterranean tunnels where we'll be caught and processed into soylent green.

Ok, maybe not that last one. But now you've had a window into how my brain works. 🙂

[Apr 25, 2013 Update: Came across this great post on the Five Roles for the Future of Analytics that moves in the same direction as my points above. It all points toward the need for better (and more visual) analytic tools in the hands of the information worker. It's the future, people!]