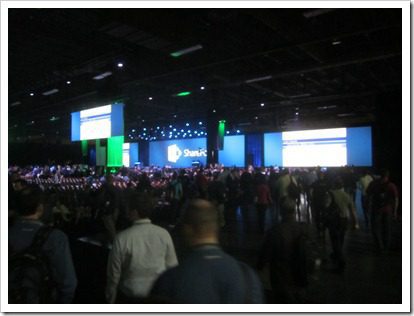 As with any major conference, the opening keynotes usually pack a punch, with major announcements about pending releases or updates to recent releases. At the SharePoint Conference 2012 taking place in Las Vegas this week, there was a lot of anticipation around the keynotes, specifically around any announcements that might be made as to the recent Yammer acquisition by Microsoft and any insight into integrations that will shortly be made available.

Jared Spataro, Sr. Director of Product Marketing for SharePoint, kicked things off with a

recap of where things have come from, with a brief look into where things are going. He mentioned their move to a 90 day release cycle, and how Microsoft is once again preparing for pivotal growth. They view SharePoint’s opportunity as another 10 years of growth, and are focusing their efforts around three areas: experiences, innovations, and the ecosystem.

Following Jared, Jeff Teper, Corporate VP and the "Godfather of SharePoint" took the stage where he talked about some of the changes to the SharePoint organization based on its growth and preparation for the move toward the cloud. He said that SharePoint has split the development team in half, with half working on Office365 and other cloud offerings, and the other half supporting features and traditional workloads.

Jeff then walked through a quick session on productivity in the new SharePoint 2013 UI (covering many of the topics that I have been resenting on in recent months, including my 3 week tour of EMEA). For example, he showed how your recent docs follows you in the 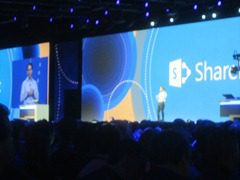 cloud, so if you go onto a new device or access Office365 from a new machine, as you login it remembers you and the last few documents you viewed, even the page you were on or the slide you were reviewing in PowerPoint, and takes you to it. The new SharePoint was designed for mobile workers, and for multiple devices. He also showed how saving documents by default saves to the cloud. You can also create a document right in the browser using the new Office web apps, so you don’t have to be running Microsoft Office to be productive. All great stuff, but not late breaking news.

A funny moment: drag and drop got the first big applause. Teper joked that there was a pool back in Redmond to see what would bring the first big applause at the conference. He said "Drag and drop, no big surprises there." Very cool was the fact that he did his entire demo on a production Office365 environment hosted on servers in Amsterdam, showing sub second performance. That should silence critics who wonder whether SharePoint can scale and perform.

But then Teper moved his talk to Yammer. He talked about how Microsoft acquired them to take social to another level. He mentioned three reasons why they were interested in Yammer:

Following Jeff, the Yammer team jumped on stage and shared some stats (Over 200,000 organizations use Yammer, 85% of the Fortune 500 companies, with social representing a $6.4 billion market opportunity, and 61% of organizations have social networks) but then jumped right into what is happening with Yammer since the acquisition:

The ‘Share with Yammer’ button.
Push content from SharePoint to Yammer, creating an embedded community around a file, showing followers, various threaded conversations, polls, and other Yammer activities around that focused content. A great way to quickly collaborate around spceific pieces of content.

Connecting Yammer with SkyDrive Pro.
What they are now working on is that when you are in Yammer and want to share a file, you can select a file — which allows you to select from SkyDrive Pro, accessing your content which lives in SharePoint. With this integration, you can have the full document experience in Yammer, including multi-user editing, with some accessing and editing the content from within Yammer, and others pulling it down locally using MS Word.

A native Yammer app in Windows 8.
For the future, they are creating a native Windows 8 app that creates a visual flow of Yammer conversations in the Windows UI. They showed a quick demo of what they’re working on, and it seems to fit in quite well with the Windows theme and flow.

To wrap up their presentations the Yammer team shared some high-level insights into their roadmap. Initially, we can expect basic integration using open graph and web parts. 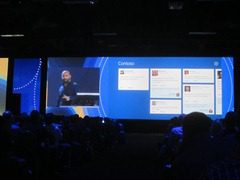 In the second phase, we’ll see deeper integration into feeds, documents, and more focus around integrating identity so that users can benefit from a single-sign on experience. And in the third phase, we’ll see even more connected experiences, combining social, collaboration, email, instant messaging, voice, and video.

Teper wrapped up the segment talking about SKUs and high-level pricing. He said that Microsoft will continue to have a standalone Yammer offering, but they are going to lower the price "dramatically" so that everyone can have Yammer. In addition, Yammer will be included with SharePoint Online as well as with all Office365 SKUs at no additional cost, and you can purchase them separately or together.

Whether today’s keynote met expectations, exceeded them or disappointed will be a matter for the Twitterverse, but overall I think Microsoft clarified what is happening now around the social experiences, and paved the way for future developments around Yammer integrations. For the deepest insights, I will be looking
to some of Microsoft’s beach head customers, some of whom are presenting this week and sharing what they’ve built, as often these companies work in tandem with Microsoft to create that future vision. Hopefully I’ll have some more to say on the topic later this week.