Tales from the Road–SPS Houston 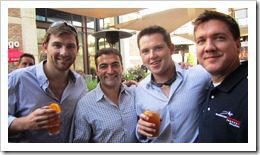 Alright, I know that I complained the entire time about how hot it was in Houston. I’ve definitely become acclimated to the weather here in Seattle, and while I do enjoy the occasional hot day (preferably when I am near a body of water, dressed for the occasion),

I love the cool weather, frequent misting rain, and overcast skies of the Puget Sound. It’s just how I roll. After 34 years of life in Northern California, I just had my fill. Nice to visit, don’t want to live there. Ok, I’m done. Now – onto the adventure:

My expectations were high for SharePoint Saturday Houston,

and I can honestly say that my expectations were met. Beautiful facility, great organizing team (thanks again Victor, Stuart, and everyone else!), and an engaged and energetic group of attendees. I introduced a new topic, called ‘Mastering SharePoint Migration Planning’ that garnered great feedback, and plenty of interaction with the crowd. In case you missed my session, you can view my slides here:

While the slides are lacking without the narrative, at least you get a sense of what was covered. Look for future articles on NothingButSharePoint and the Axceler blog exploring some of the topics covered. Joining me at the event were Jamie, John and Nate from the Axceler office in Los Angeles. John and Nate were so enamored with the Texas culture that they went out and purchased cowboy boots and belt buckles. The exuberance spilled

over into the SharePint that evening, with a nice turnout of speakers and attendees for drinks and food (thanks once again to Rackspace for helping make it happen).

After an hour or so at the SharePint, we said goodnight to everyone

and attempted to grab a table for ten at a couple of the surrounding restaurants – and came up empty handed. So we returned to the SharePint. After a few more conversations, I decided to venture off to find some food on my own, and said my goodbyes a second time. I found some excellent sushi, and wandered by the SharePint again….only to find that people were still hanging around. There were multiple bands playing in the City Center quad, and so people were enjoying themselves and the conversation. So I hung out for another 45 minutes before saying goodbye one last time.

The next morning, I was up early for a 40 minute cab ride to the airport and a 7am flight. As I reached my gate, I sat down across

from what was clearly a rock band from a different era. Turned out to be the German metal band ‘Accept,’ wrapping up their US tour before heading down south to Mexico City. Thank you wi-fi and Wikipedia for helping me to remember them (not that it was my kind of music, but I do remember their album ‘Balls to the Wall’), and I snapped a photo with the lead guitarist and their new lead singer, and then got their autographs….for the heck of it. And then I went to first class, while they filed into coach.